Read Next
What Do You Think I Am?: Navigating the Problem of Personhood

Communicating Too Much, Too Little, and Toward Peace: A Q&A With Menahem Blondheim

You’ve been working on the nexus of religion and peace. How does that relate to your other Enhancing Life Project activities?

Both religion and peace are urgent everyday issues where I come from. I serve as the director of the Harry S. Truman Research Institute for the Advancement of Peace. It’s the Hebrew University’s largest research institute in the humanities and social sciences, and also the home of the university's “peace industry.” My work there is guided by the notion that in a most fundamental way, peace enables physical life, but also the life of the mind. By relaxing and normalizing external circumstances, internal pursuits can dominate. If there’s peace, you don’t have to worry all the time about how the environment outside is endangering and constricting your life. Bringing peace is, in a sense, a prerequisite for enhancing life.

The thinking power within The Enhancing Life Project, which has a strong emphasis on religion, can help us in a crucial avenue of promoting peace. Strangely, the religious avenue is an aspect that the tremendous energies and efforts involved in peacemaking the world over tend to overlook.

What are some ways that you can envision your research, or The Enhancing Life Project more broadly, having an impact on public discourse?

The concept of counter-worlds is a crucial one: that’s how I made the connection between efforts for peace making and our project. Peace is a vision of a different kind of being, a different kind of world. For making peace one has to envision an alternative existence—it doesn’t have to be radical; I’m not necessarily talking new-age here. We can think about the most basic, fundamental, individual, and societal attitudes toward the world as leading toward harmony or targeting harmony—that’s a kind of counter-world that we all dream of, and one that religion has charted specifically. Religion tries to be a road map to a different kind of living, living in an ideal, and inevitably peaceful, world. This nexus of religion and peace is crucial.

In all world religions, the ideal world that belief is striving to create for man or to help man reach—this counter-world, really—is one of perfect peace and harmony. These notions inevitably trickled down to secular spheres of imagination: after all, religious discourse and religious thinking dominated so much of intellectual progress over history. So yes, more secular notions of world order and harmony emerged, but they ultimately have a deep religious history. For example, the various notions of eschatology, including that of a better kind of world, of a counter-world that operates on principles of harmony, cooperation, and mutual efforts to enhance life, all have strong religious overtones.

What are some ways that you can envision The Enhancing Life Project and the notion of “counter-worlds” facilitating peace in practice? What revolutionary benefits does religion offer?

We do have some examples—for instance, in East Asian religions—that show how religion can attenuate political conflict, let alone military conflict. They have served as at least an attempt at coexistence. Religion, sans meddling in politics, can try to bring about a better kind of existence based on the fact that religions cross national boundaries and coexist with one another. This observable coexistence can demonstrate to us that religion has this component of a counter-world. Its idealism, perfectionism, the fact that it doesn’t compromise, and has a full vision—these principles don’t necessarily mean that it has to conflict with other visions.

This is something I learned from Günter Thomas and Protestantism: the challenge is to postpone this monolithic vision of how the world should look. If you have the

patience, you can say: okay, let’s try for a better world—in the future, the ‘true religion’ will present itself and prevail, but in the meantime, let’s see what we have in common, how we can promote an environment that could help religious development. These are ways of thinking in which religion can actually, in a practical way, start working or serving as a cause of peace in our world today.

The game-plan, very generally—and this is not only a theoretical idea, but we’re trying to actually do something about it—is to first have religious leaders talk to each other. This kind of dialogue begins within religions, then moves on to between religions. The way this seems to work best is by bringing academics into the conversation. In my experience--what this project is teaching us--is that academics and religious leaders can talk and should talk. Academics have an external understanding of religion, and seem to be able to moderate conversations pretty well, let alone “translate” it for the benefit of the next link in the chain: statesmen and politicians. In this project, we’re all scholars, and it seems to be working. Scholars and religious leaders move onto a dialogue between religious leaders, and then onto a dialogue that involves religious leaders and politicians or statesmen.

Now, the Pope, when I talked to him, expressed himself that he believes in this track, and in the fundamental notion of religion as a track to peace. In his activities—crossing religious boundaries, reaching out to other religions, and trying to promote a better life with the various religions working together—this is exactly the way he’s operating. He’s also, obviously, a dominant religious leader, so he’s a central figure in this kind of effort. He just recently met with Trump and that was probably the only international interaction Trump had that wasn’t disastrous.

We’re working with the Pope on a project that he founded, focused on empowering young people, and having them lead efforts to promote social justice and social welfare along with international peace. There’s a specific project that took place in Jerusalem this July, and was addressed by the Pope. It’s called the Scholas. This organization is creating an environment in which younger people can take the lead in bringing about peace, social welfare, and building a better world. 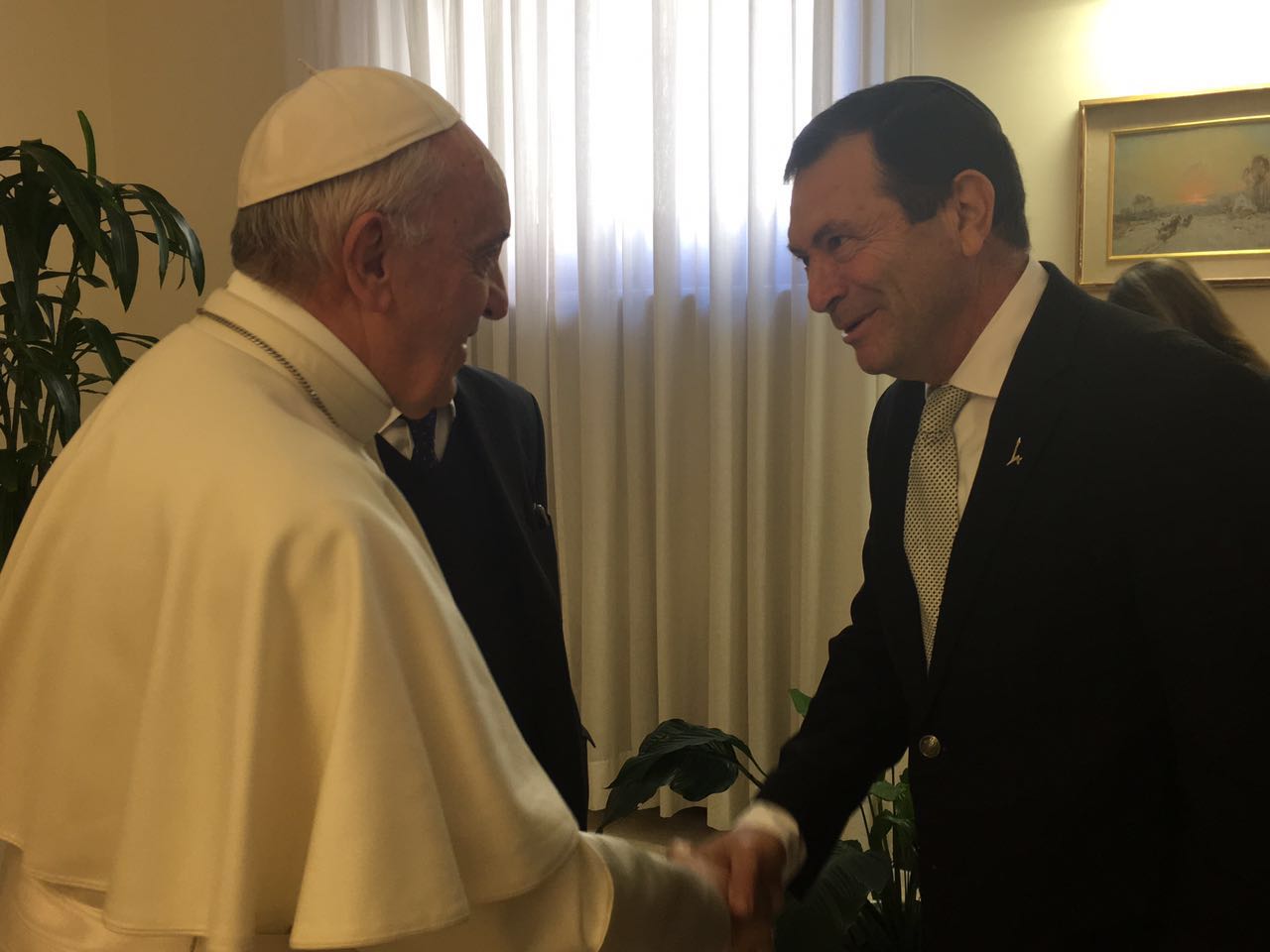 In your work, including coordinating with both the Vatican and young people, what insights have you gleaned about communication across large distances and among young people and among people from different religious and ethnic backgrounds?

It’s that we have to be much more aware of the unnoticed, practically transparent machinery that enables dialogue and joint-action. It shouldn’t be taken for granted. What usually happens is that we tend to focus on the entities that need to cooperate and the relationships between them. But the nervous systems, the blood flow that enables these relationships—it’s all communications. We think of the challenge structurally, of one religion encountering another religion, but what in fact is happening, and where this whole process occurs, is in the process of communication, of figuring out a set of coordinates, terminologies, and channels that enable this give and take. The fundamental element of any social change is communication; it’s as simple as that. But strangely—or not—throughout history it is has been a blind spot. It may be surprising, but not until after the Second World War, has communication as a concept—as an aspect of the world, and of life—been picked up and looked at. We’re now taking up the slack. Basically, communication is the first step in all these processes of trying to improve relations between individuals, between groups, between societies, between religions.

Within a lot of emergent spaces where predominantly young people are trying to grapple with issues of communication, a major buzzword is how to make conversations inclusive, which is a pretty broad term, but I imagine that in planning something like the event you’re coordinating with the Vatican, you might be thinking a lot about practical applications of how to make a conversation inclusive. What are some takeaways from this process, so far?

Strangely, my response to what you’re saying is a little counter-intuitive: in figuring out how best to communicate, you also need to know when to be silent, and who not to talk to. Conversation and dialogue is not a silver bullet: it’s not the answer to everything. One needs to know how to handle and manage this art of communication and interaction, including limiting it—which is in many ways the theme of a major research project I’m working on.

My main empirical research project within The Enhancing Life Project shows that communicating all the time, with everyone, about everything is not ideal, necessarily. Inclusivity is extremely important, and we should consider the entire universe as possible partners and interlocutors and protagonists—as people we want to talk to. But we need to figure out how to talk to whom, and when, and why. Communications alone won’t do it. Strangely, by limiting communications, not talking to everyone all the time, we may find better understanding and interaction. That’s where my project with smartphones is pointing, in a very deep sense: we understand this technology as fundamentally enhancing our lives by enabling us to be in contact with everyone all the time, by being exposed to all kinds of information constantly. Intuitively, that breaking down of boundaries seems like enhancing life. However, the end result may be total atrophy—there might be no life to enhance, because we’re all the time in interaction, in contact, receiving and imparting information. We have to think of limits—where over-communicating might not be enhancing but debilitating—reducing the liveliness and richness of our lives.

There’s been a lot of conversation on similar topics in relation to how having so much information at your fingertips all the time means that you can really cherrypick your information, and surround yourself entirely with an infinite number of people that agree with you. There's been a lot of discussion to that effect in relation to the news landscape in the U.S.; do you think that there's a relationship between broader systems of receiving information and how we interact with our cell phones one-on-one?

That’s a perfect example—we call what you’re talking about “selective exposure.” We think we’re interacting with the entire world—we’re not. We’re actually interacting only where there are channels already existing; we’re not necessarily enhancing ourselves in the total sense. We need to map all of the possibilities of connection, and chart which can add most to broaden our knowledge and perspective, even if not the most familiar and comfortable—we need the strength of weak ties. Instead, we tend to hear our friends and like-minded people. In that sense, we have to be very proactive and cautious about communications—you don’t want to be a part of only a single conversation. You want to actually enhance yourself by these communications. Through both too much and too little communication, as well as by selective exposure, we’re limiting the options and possibilities to enhance ourselves, to build ourselves up through connection.