Read Next
Glorious, Vulnerable Life: A Q&A With Dr. Kristine A. Culp

The walls, washed in deep carmine and patterned with fanciful designs, drew me into the room. In the middle, something waved like a flag over an old octagonal wooden cabinet with its drawers akimbo. Approaching it, I saw that the flag was a wasps’ nest still attached to a branch. Odd bits of nature, mostly rather large and exotic insects, were arranged in the drawers. I glanced around. With a start, I realized that scores of them were marching and winging their ways up the walls, as if they had fled the cabinet. Each perfect specimen was pinned in perfect place—iridescent, striped, lunar green, leafy green, black lace winged, horned, polished—insect glitterati. 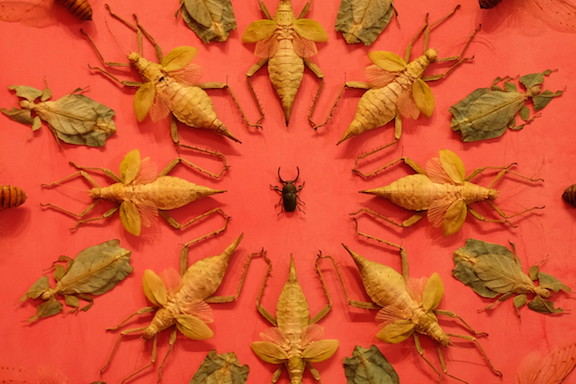 Was I in some mad collector’s chamber? I leaned in and stepped back, looked again, leaned in, stepped back. Yes, the insects were real; no, they weren’t endangered species. The walls were dyed red with cochineal—in a manner of speaking, with insect blood.

Jennifer Angus’s work, In the midnight garden, plays on both early modern cabinets of curiosities (Wunderkammern, precursors to natural history museums) and the twentieth-century boxes of artist Joseph Cornell, placing the viewer inside them, as it were. Viewers are asked to surrender to the strange glories of the insect world, a world that is filled with astonishing, disturbing, and enchanting things.

Angus’s work is one of nine gallery-sized installations commissioned for the exhibition, WONDER, now at Smithsonian Museum’s Renwick Gallery in Washington, DC. The exhibition, which continues through July, celebrates the re-opening of the newly renovated Renwick, the first purpose-built art museum in the United States and now home to the Smithsonian’s American arts and decorative crafts program. It has been wildly popular with all ages, generating a record number of visitors and a superabundance of Instagram posts.

Why has wonder captured such popular fancy? When a near infinity of information can be searched and downloaded from anywhere at any time, why flock to Wunderkammern filled with odd glories? Some reviews criticize the Renwick for offering “eye candy” for the masses and abandoning its dedication to the craft of more unsung artisans. But even if that were so, the yearning for wonder is real. And, these questions are basic for understanding our cultural moment—and the possibilities of the enhancement (or endangerment) of life. They are also related to my own study of “glory” as a theological, aesthetic, and sensory register for depicting the full aliveness of life.

The exhibition doesn’t attempt to define “wonder” so much as to evoke it. Works by important contemporary artists, including Maya Lin, Leo Villareal, John Grade, and Janet Echelman, invite puzzlement, delight, play, and contemplation.

Just inside the front door, visitors encounter Tara Donovan’s Untitled. Its thirteen-foot-high forms, reminiscent of hoodoo land formations in Utah’s Bryce Canyon and in the Canadian Rockies of Banff, dwarf viewers in canyons of light and shadow. That Donovan’s phantasmal forms are built of heaps of styrene index cards, truly quotidian stuff, can hardly be comprehended. How did she make them… and why? 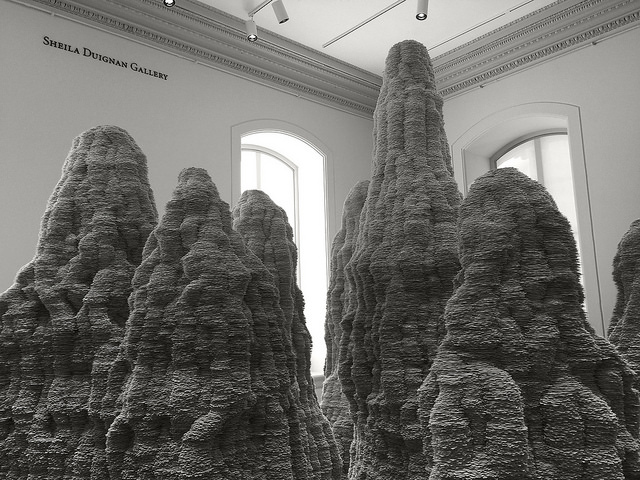 In the next room, Gabriel Dawes’s Plexus A1 seems to allow people to slip into and out of rainbow light—a dazzling effect created by embroidery thread strung like a giant harp. 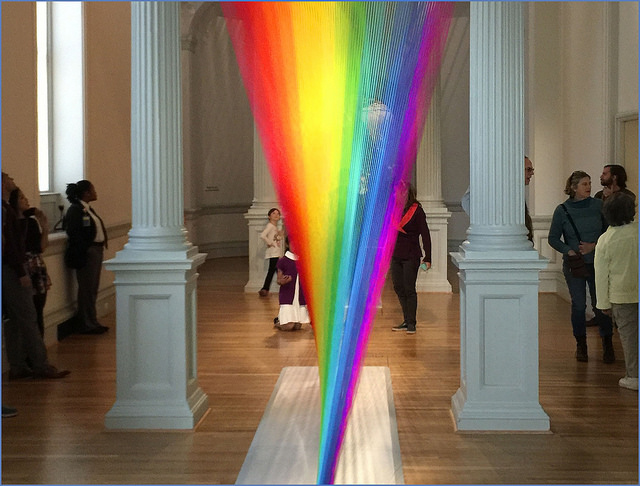 Upstairs, Maya Lin’s Folding the Chesapeake offers its namesake bay mapped with imperfect blue-gray-green marbles. The Chesapeake crosses the floor, shimmering delicately in the daylight, while its tributaries flow down the plaster walls like so many cracks and fissures. 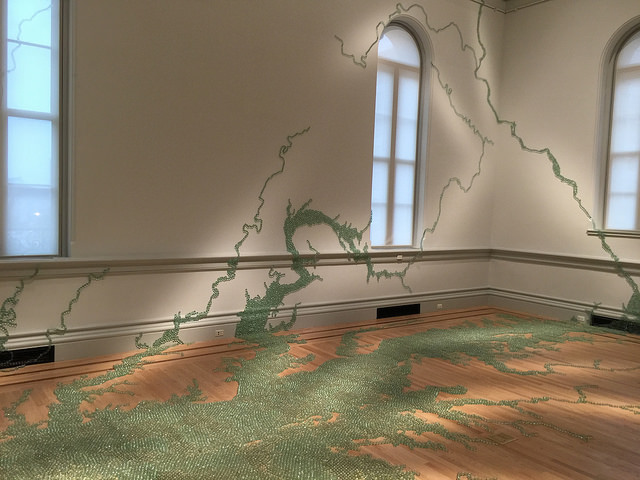 The works astonish by sheer scale and detail: Angus’s insects cannot be contained in cabinets; Lin’s Chesapeake has to be folded into the lesser dimensions of the room. Wonder, these works seem to comment, can challenge forms and ways of knowing. Wonder is not mere diversion.

Throughout the exhibition, wonder is often indexed to a living “natural” world, to insects, hoodoos, an estuary, a vast tree, a ferocious tsunami. Questions arise: Is the wonder of “nature” lessened or heightened by artistry and craft? By technology? Can the wonder of hoodoos be kindled by contemplating human-made sculptures? Or is the “natural” wonder of hoodoos being lent to layers upon layers of manufactured and supremely “unnatural” styrene cards? Is the attribution of wonder to “natural” and to made things without distinction in fact dangerous in a time of profound ecological threat?

All of the works craft “wonder” from humble stuff—index cards, thread, marbles, brambles, junk tires, insects. Disregarded creatures and discarded stuff are imbued with a fitting majesty. In the exhibition catalogue, curator Nicholas Bell traces this sensibility to the great Christian theologian and Bishop of Hippo, Augustine. Elaborating a passage from the Confessions, Bell writes, “The quotidian was as deserving of wonder as every other component of this world, including its occupants, and all were examples of God’s work” (43). Enhancing life might just require reclaiming the quotidian world as a place of wonder.

Wonder can disrupt the presumptions and boundaries of who we are and what we know. Fashioned from humble stuff, the Wunderkammern of this exhibition startle us with the strange glories of the world. They instill the world depicted and its viewers with feelings of astonishment and full aliveness. In this way, wonder expands the felt intelligence with which we interpret ourselves and the ultimate environment of creaturely and cosmic life and thus may contribute to the enhancement of life.

Read a Q&A with Kristine Culp about her research here.